In towns like Brooks, Alta., and Owen Sound, Ont., hockey has always been a rallying point for the community. In pre-pandemic days, arenas were alive every Saturday night with the sounds of skates scraping across the ice and fans cheering.

Among the excitement of the stands, Dr. Robert Petrella saw an opportunity to use communities’ enthusiasm for their teams, and for hockey, to motivate fans to improve their health. 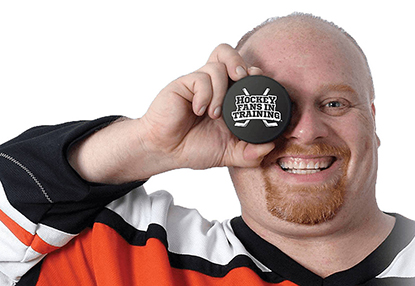 The theme for Hockey Fans in Training is ‘it’s time for a gut-check.’

He and a team at Western University developed Hockey Fans in Training (Hockey FIT), a 12-week program and research study that uses fan culture to encourage men across Canada to eat healthier foods and become more physically active. By teaming up with junior hockey franchises, Hockey FIT incorporates a passion for hockey into the program. And while arenas remain quiet for the time being, with games sidelined or being played without fans, Hockey FIT continues to expand.

What began as a pilot project in London and Sarnia is now in 32 communities across Canada — from Chilliwack, B.C., to Kingston, Ont. Even pandemic shutdowns haven’t dampened the enthusiasm for hockey or the motivation to get healthy, said Petrella, emeritus professor at the Schulich School of Medicine & Dentistry and Professor in the Faculty of Medicine at the University of British Columbia.

“We’ve had interest from more than 2,000 men across the country,” he said. “It can sometimes be difficult to engage men in fitness and health programs, so we are using hockey, their love of their team and the camaraderie that comes with it as the vehicle to motivate them to join and stick with it.” 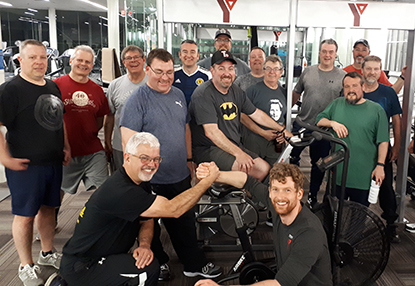 In this pre-pandemic group photo, participants of Hockey FIT gather in a YMCA fitness club.

In Owen Sound, more than 10 per cent of the community would be in the stands to cheer on the Attack on any given weekend before the shutdown. In the crowd was Pete Miller, a season ticket holder for more than two decades. With retirement on the horizon, Miller seized the opportunity to join Hockey FIT during the first iteration of the program as a way to improve his health and wellbeing so he could enjoy retirement to the fullest.

“I realized that I’d spent too much of my time sitting around; I was starting to feel really sluggish, and I thought it was a good time in my life to get fit,” he said. “Everyone that was in the program was also a hockey fan, so we had that common bond, and that was motivation right there to come to the program.”

Part of what makes Hockey FIT unique is the incorporation of hockey into the actual programming. Hockey FIT coach Brandon Downing was also an athletic therapist for the local team and brought that insider knowledge to the program.

“It was really cool to see familiar faces, those season ticket holders that always sat in the same spots in the stands, signing up to be a part of Hockey FIT,” Downing said. “And then when the session ended, they were still meeting up to work out together, so it was clear that it worked and they had really bought in.”

During the pandemic, the Hockey FIT team had to move some programming to virtual platforms, but they were able to work within each province’s COVID-19 restrictions to run the program safely in person in B.C. and Ontario through the summer and fall.

Now, they are gearing up to continue their expansion in 15 communities across Canada including Lethbridge, Saskatoon, Halifax and Charlottetown.

Petrella said seeing the communities come together around the program during this trying time has been inspiring.

“These communities are feeling the absence of the hockey season, so the fans are really excited to have something to be a part of,” he said. “At the end of the day we don’t just want to do a research study, we want to be able to create a sustainable program that will continue in the longer term.”

Petrella and his team used the shutdown as a time to develop ideas for the future. In the works are parallel programs for women and families.

“The pause in programming gave us the chance to see where else there was opportunity to advance the program, and we are excited to see where it will go next,” Petrella said.

The Hockey FIT Team is currently recruiting participants in these communities: